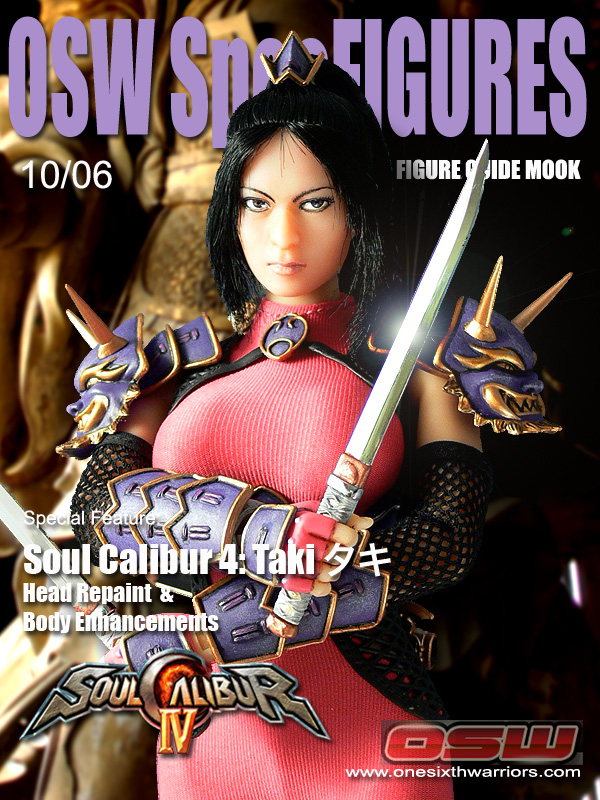 Quote from Wikipedia: Taki is a ninja, who after a battle with a demon in a haunted temple felt her magical ninjatō Rekkimaru begin to weaken, and believing Soul Edge to be the cause sought the blade to destroy it. Along the way she recovers a second weapon, Mekkimaru, from an innkeeper and her daughter she had been sent to kill, and in order to protect them informs her masters that the daughter’s lover Li Long had instead taken the blade, though is found out and becomes a fugitive herself. Eventually finding and defeating Soul Edge’s host, Cervantes de Leon, she merges a fragment with Mekkimaru, but finds the resultant sword gives off an evil aura. Unable to destroy it, she instead decides to try and tame its evil herself, and eventually comes into direct conflict with her former master, Toki. Realizing that Soul Edge had reformed itself, she chased after the blade to destroy it for good.

This figure is based on the Triad Soul Calibur Taki released last year. The costume and the accessories are nicely made but I do not like the Otaku body at all. The hip and thighs are too weak and the articulation is poor. I decided to rework the entire body.
1) The original Triad figure with Otaku body
2) Tried a few different kinds of body and finally settled down with Takara CG2.0
3) Further customization to add stronger muscle and re-sculpted breasts

The breasts of the CG body was too round. I re-sculpted them to make them look more natural.
1) drill holes around the line for the cutting work
2) the breasts are removed
3) use epoxy putty to re-built the breasts

Other modifications/enhancements:
1) inserted small magnet at hip for fixing the ninjato Mekkimaru
2) inserted another small magnet at the back for fixing the ninjato Rekkimaru
3) magnets were glued on to the ninjato’s
4) sculpted the abdomen muscle
5) sculpted the thigh muscle
6) added subtle shadings to the armors
7) the limbs were heavily trimmed down for fitting the armors
8) the feet were cut from the Otaku body including sandals and socks
9) the CG ankles were cut and integrated with the Otaku feet. brass rods were added as reinforcement

The original Triad headsculpt is too toy-looking. It took me quite some time to hunt down a head to match Taki’s look. I was extremely lucky to pick up this Takara Aska head during my last trip to Tokyo. When deciding the style, I intended to give a more intensive look rather than a plain beautiful face.
1) the head I bought from Tokyo
2) the hair line was too high around the neck
3) factory paint was stripped
4) pupils were first drawn, eye alignment was checked
5) the 2 eyes and lips were drawn
6) gloss clear paint was applied to eyes and lips
7) painted the “hair” at the back of the neck so it looks a bit natural from behind
8) brown chalk was added to face as shading
9) close up view: the pupil is actually brown with thin radial black lines and a small dark dot in the middle. It is important to add grey shading to the top of the eye ball. That makes the eyes stand out.